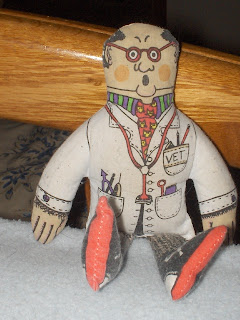 Hi effurrybuddy! This is V-E-T the Victim. I like to use him for a pillow, but mostly I LOVE to kick and bite him. He looks a lot like the real V-E-T. Enough said about him.

It's now time for:

This week's Thursday Thirteen is...

Click here to see more Thursday Thirteen participants. Back to bitey the Doctor.

Thanks for visiting me!

Reese =^..^=
I'm a little girl Tuxedo kitty. I love to play and romp through the house. I'm a little cat with a big imagination.

Clicking on some links or images I post may provide me with a small income – thanks!